Over the past year, NASA’s Parker Solar Probe came closer to the sun than any other object designed and developed by humans—and CU Boulder scientists have been along for the ride.

The spacecraft has whirled around the star three times since its launch in August 2018. In the process, it flew within 15 million miles of the sun’s surface. This close brush allowed scientists to observe the chaotic behavior of the star’s corona, or the highest part of its atmosphere, in previously impossible-to-see detail.

Now, researchers on the mission have released the first set of results from the probe’s red-hot path through space. The findings could help scientists better understand how the sun ejects waves of energetic and potentially dangerous particles that can shut down satellites orbiting Earth and even disrupt power grids on the ground.

David Malaspina, a Space plasma researcher at the Laboratory for Atmospheric and Space Physics (LASP), is part of a team of CU Boulder scientists who contributed to those early insights. The group designed a signal processing electronics board that is integral to the FIELDS experiment, one of four suites of instruments onboard Parker Solar Probe.

One year into its seven-year journey, Parker Solar Probe is already challenging what physicists thought they knew about humanity’s favorite star.

“There are 24 orbits in total before we get to the spacecraft’s closest approach,” said Malaspina, an assistant professor in the Department of Astrophysical and Planetary Sciences. “We have a long way to go, but already we’re finding incredibly interesting things and brand-new physics.”

The spacecraft itself is a feat of engineering—capable of hitting speeds of more than 400,000 miles per hour and packing a one-of-a-kind heat shield that will help it survive the extremes of space. Researchers like Malaspina are hoping that the Parker Solar Probe will help them answer several burning questions about the sun’s corona that were previously beyond their reach.

For starters, how does this roiling, gas-filled region of space get so toasty, hitting temperatures of nearly 1 million degrees Fahrenheit?

“How this is happening is basically unknown, especially in this region where the solar probe is traveling,” said Alexandros Chasapis, a research scientist at LASP who has worked on the mission. “We just didn’t have any data.”

Even with those unknowns, Parker Solar Probe researchers were still surprised by what they saw during their first few passes around the sun.

Scientists have long known that the sun’s corona is a turbulent place where electric and magnetic fields, the focus of the FIELDS experiment, twist and snap like rubber bands. The closer the spacecraft got to the corona, the more the team realized that those turbulent regions weren’t the whole story.

“Immediately adjacent to those regions are places that are extremely quiet, like being on a calm lake,” Malaspina said. “The spacecraft crossed from calm lake to raging storm to calm lake. It kept alternating.”

The FIELDS team published its findings earlier this week in the journal Nature. 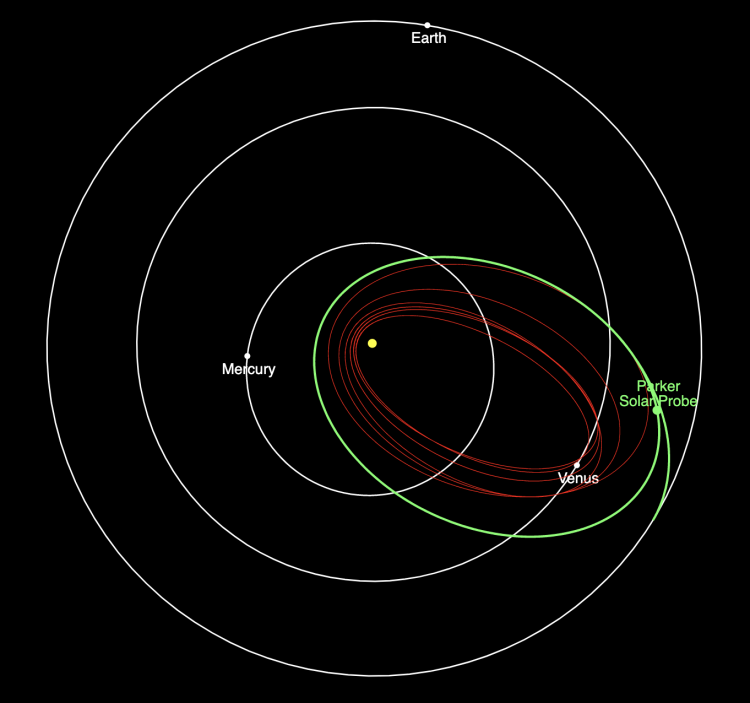 The researchers still aren’t sure what the consequences of that patchwork structure might be for the solar wind emitted by the sun—they theorized that the most dangerous outbursts from the sun might actually come from its calmest spots.

But Malaspina said that the electric and magnetic field sensors that make up the FIELDS experiment could give scientists a closer look at that structure.

In a second paper published recently in Astrophysical Journal, he and his colleagues explored a closely related phenomenon: plasma waves, or ripples in the boiling-hot clouds of ions that emanate from the sun.

“Near Earth, you rarely see these plasma waves at all,” Malaspina said. “But once you get in toward the sun you see more and more of them. They fill up a large volume of space.”

Using FIELDS observations, the team found that a certain type of plasma wave seemed to emerge directly from the solar wind’s calm lakes. These waves, Malaspina said, are likely stirred up by electrons spinning around the sun’s magnetic field lines, a bit like a child going down a twisting slide.

“Their trajectory winds up looking kind of like a helix,” Malaspina said. “The electrons spiral up the field line and can grow these types of waves.”

He added that the observed plasma waves could allow scientists to make indirect measurements of physics occurring deep within the corona—beyond the range of the Parker Solar Probe’s instruments.

The CU Boulder team is also just excited to be a part of a mission that is already rewriting space science textbooks. In many cases, researchers at LASP have been the first people to see data collected by the FIELDS experiment, a role that Chasapis called a “privilege and a responsibility.”

“It’s really fun to get to play with the data,” he said.

Malaspina, who has spent his career studying the sun’s physics, is eager to learn more about how the star connects to life on Earth.

“Energy from sun is an integral part of our natural world, just as much as air or water or the ground below our feet,” he said. “Learning about solar processes is vital to understanding how humans can thrive on Earth or anywhere else in the solar system”